Once upon a time in the East 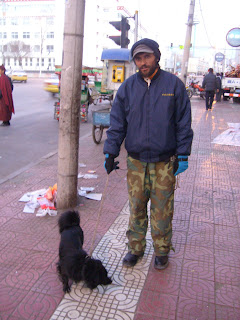 The humid hot summer of 2006 in the city of Wuhan, central China, was in its best, and one of those mornings in that big city i woke up, prepare my bags, my bike and my dog, Skili, and begun once again a bike trip to the unknown adventures in a country where mostly all the roads are pack with noisy motors and thick dirty air. Thats the daily reality for millions of people including myself. This time I head it to the north, to the capital city of Beijing. Since I been in this country for about a year, I already begun to understand and respect the way of living, the way of do things, much more different from my background, in short, how to survive on the road without western hotels, food or people. There, in Beijing, I would pick up my good old friend, Karin, who was arriving from Paris, with her big backpack full of hopes and dreams ready to meet a all new country and a few comrades.

After 3 days in a small hotel near Beijing, Huairu, we started to bike together to the west, in the direction of Inner Mongolia. I recall the last impression leaving the place, a long queue of trucks far outside Beijing trying to get through with tons of merchandise to the capital, to the millions of new buyers. Sounds funny, but actually being there in the middle of the afternoon with thousands of motors around its pretty different, except of course for the “Hello! Hello!” of the drivers who are always amazed to see two “Laowai” (foreigners) in bicycle in their place of work.


But all will be soon easily forgotten as we cross the famous Great Wall of Badaling, where crouds of tourist line up to see one of the wonders of the world. That is the beginning of the desert that is gradually taking his new territory, kicking out everybody and attracting people like us who are nobody, but soon after Karin left by train to Wuhan, where she will visit her pals.


I continued my trip by myself with my loyal friend Skili in my long bicycle, heading to the dessert of Gobi, in the west, while the sun start to burn my skin and my head. In couple days i will cross the provincial capital of Inner Mongolia, Hohhot, with hundreds of buildings and cars and lots of people running fast to their daily life's. Melon, grapes, apples and other fruits were on the way to refresh my self of the heat. After passing other big and small city's i finally reach the shore of the Yellow river coming down from Tibet. I will follow it until i get to Ganzu province, to the capital city of Lanzhou where most of the Muslim Hue community lives. Most of the 3 days I spent in this big industrial city, I had diarrhea. The cause was, for sure, the polluted food sell on the streets and the garbage place where I could put my tent in the night.


Physically exhausted, I left for the mountains in the south, where certainly I will find good food and friendly people, like the old man and his family, in a tractor in a long uphill, who throw in my hands a big watermelon and a big smile. Villages and more villages of Hui people with their mosque in the center of the town, the towers pointed up to the blue sky, were passing by, with their little market place, where I could get some dry tobacco to smoke, sell by an old man. So in the mountains I was, getting higher and higher, far and far from modernity and closer to the Tibetan region. By the time i will cross the border to the province of Sichuan, i already were at some 3000 mt high, spotting here and there some Yaks, that big black cow that give the people of the mountains the necessary things to survive, walking freely on the grassland. So in the summer I was and the wealthy Chinese tourist from the big city, come to this region looking for some adventure, most of then by bus or jeep, but also a few by bicycle, buying all kinds of souvenir to show to their friends down there in the city. So in the Tibetan region i was, and the warmth of the people and the blue of the sky, make me think a lot to go west even more into their land. Also thanks to the two Tibetan boys who were going to Lhasa by bicycle and with I spent a full day on the road, but I could not fallow because they were going so fast.
Posted by alek leka at Thursday, February 19, 2009