Once upon a time in the mountains 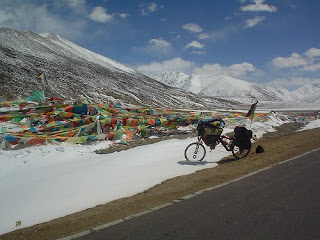 Fast, that’s the way many of the bike travellers do it, because of time, because of money, because of the weather, because of many excuses to just go fast. But, how many towns, how many people they left behind on their way to the hurry. How many new experiences they have lost. That I understood long time ago when i realize that the places i will cross and the people i will meet will be certainly, most of them, just for a few instants, a few moments, and thoes peoples and places will be forgotten in time forever, unless we give our self the opportunity to the unknow to the new faces of this vast planet, new encounters with the differents colors, sizes and shapes of human nature.Mountains and rivers were the daily food of my eyes, my ears and all of my senses, and soon i will have to decide to go west, even to highest and dificult mountains of Tibet province, or, just go south to the prairies of Chengdu, Sichuan province and then the tropical Yunnan province. Without a doubt the meeting with the Tibetan bikers and their sweet milky tea cooking in a strong wood fire, imposse in my brain cells the unlogic idea of going to the high passes of Tibet in the middle of September, when the autumn and soon the crude winter, will settle in this regions for many months ahead. But, what logic could be found in a life of a nomad, looking anxiously for excitment, adventure and love in every minute that will follow the next and the next and the next. No reason can be more strongly than faith in a land of believes, myth and legends, in a land of suffering, joy and fortune. Soon after i head to the west, to the stony and sandy roads, most of the time following a river then another and another more and more Buddhist temples, monasteries and stupas will appear in front of my eyes with all those youngest in dark red and sometimes orange cowl, running around playing some happy game.After crossing the border of Sichuan and Tibet province over the Yangtse river, during the night, the roads to the passes, the distance to get to the other side, became longer and longer, walking and pushing the bike, sometimes for many days, sometimes for many nigths, when the full moon will come and her brightness will light my way under the clean sky and snow picks. Passing many towns during the night will allow me to go farther without been harass by the local police who will always try to turn me back or make me pay for don’t have a passport and permit to be in those places. And yes it’s happen before couple times, so I learn to don’t say what i suposse to say. Certainly the local Tibetan people help and guide me in my journey, wherever it was to find food, shelter from the rain or avoid the so call, Law, in everyday i was getting more deeper in that forbbiden land for somes and sacred for many. Passes and passes went by, some during the day some during the night, with my little skili running away from the big Tibetan mastif dogs and persuing the no so little moles around the hills. How could I ever forget the morning on the top of a high pass after been walking half day and half night just to wake up and see four snow picks in front of me? How could I ever forget the night when I saw all that little lights in the mountain moving from here to there, only to after find out that there were some people looking around for something? How could i ever forget all those rivers, valleys, towns and mountain passes that i croos by? With the strong blue sky and almost empty roads i finally reach the doors of the Holly city of Lhasa in the begining of october coming through the north east, passing the citys of Chamdo and Nachu.But not far from there was the big river, the sacred Brahmaputra in Hindu, who was going down to the west and then south to India and Bangladesh. At this time of the year it’s pretty low and so the road beside is more accesible even for a bicycle. There in the bridge was the first army control, but they were cool and didn’t stop me, maybe because it was the nigth or maybe because it’s a open region for tourist, or just because the good Buddha was helping me. He was guiding me through His land with a big care for me and my little Skili, showing us the signs everyday and nigth. There it was only joy in my heart to have the great opportunity to sense this magical place and learn the knowledge of times. So i follow that river for days, spotting some big sand dunes and one little black scorpion on it. 7780mt is the altitud of that big rock at the end of the road. That fantastic view of the pick on top of the clouds almost falling in to my eyes get in my memorie for ever, and that rock was the sign that the way to India was not there but somewhere in another time. Exausted, I rest in a little beach for 3 days thinking where to go, because also going down the river in the bambu raft that I made, over the cold and wild waters will be too risky. So i went back to the first big river cross and made my way to Bayi city, the army city. I supouse that dressing like a Tibetan man help me to pass the local controls in the middle of the afternoon and continous my way to the west, to Lhasa.
Posted by alek leka at Thursday, February 19, 2009